Your African Safari uses cookies to improve functionality and performance of this site. More information can be found in our privacy policy.
By continuing to browse this site, you consent to the use of cookies.
OK
Spotted hyena

Hyenas are carnivores that are known for their scavenger tendencies. They are clever animals and have been reported to have figured out how to invade complex human food storages. Though purported to be primarily scroungers, hyenas, particularly spotted hyenas, kill nearly all of the nourishment they consume, and have chased away larger predators, such as lions, from their kills.

Three species of hyena are recognized:

Spotted hyena (Crocuta crocuta) is the largest and the most people associate with hyenas. It is also known as the laughing hyena due to the noises they make when communicating. Spotted hyenas are very vocal and frequency variation indicates their social ranking in the group. Spotted hyenas are the only social species of hyena, and their social structure is considered as complex as that of primate groups such as baboons. They live in groups called clans which are lead by females. Spotted hyenas are listed as least concern on the IUCN Red List.

Brown hyena (Hyaena brunnea) is also known as the strandwolf. It is found in southern Africa: Botswana, Mozambique, Namibia, and Zimbabwe. They are listed as nearithreatened.

Striped hyena (Hyaena hyaena). The smallest of the three hyenas, this hyenas is primarily a scavanger. The striped hyena is listed as near-threatened. The best locations for seeing striped hyenas on an African safari are Kenya and Tanzania.

There is also the aardwolf (Proteles cristata) which is the smallest of the hyenas and not always included in the classification of hyenas. Aardwolves live off a diet of termites.

Although hyenas hunt in packs and are more active at night, they are genetically closer to felines than to canines. Hyenas live in packs called clans that can reach 80-90 animals in size. The clans are dominated by female hyenas that, when ready to breed, have a preference younger males. The average gestation period for hyenas is between 90 and 110 days, depending on specie, with the average litter size being two cubs. 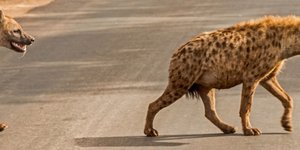 Published on November 15 2018
By: yourafricansafari.com 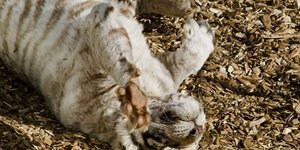 Published on February 19 2015
By: yourafricansafari.com