Your African Safari uses cookies to improve functionality and performance of this site. More information can be found in our privacy policy.
By continuing to browse this site, you consent to the use of cookies.
OK
Lions in Central Kalahari Game Reserve | J. Goetz

The lion is related to the jaguar, leopard and panther. After the tiger, it is the largest big cat. Unlike the other big cats, which are primarily solitary beasts, lions live in groups called prides. Male lions are easily distinguished from females by their large manes, which can vary in color from a light beige color to a very dark brown color. Lions are carnivores and nocturnal hunters. The females do the majority of the hunting and will work together to bring down large animals such as wildebeest, buffalo, crocodiles, zebra and even a weakened elephant. The gestation period of a female lion is around 110 days, with two to four cubs being the average number for a litter. Male lions will leave the pride at around three years of age, while females will stay with the pride into which they were born their entire lives. 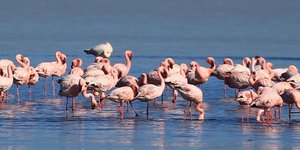