Your African Safari uses cookies to improve functionality and performance of this site. More information can be found in our privacy policy.
By continuing to browse this site, you consent to the use of cookies.
OK
Pangolin in South Africa | Josh Tough, Audley Travel

The physical description of a pangolin is best described as an anteater with silvery, plate-like scales that closely resemble the pattern of artichoke leaves. The scales, which are delicate on baby pangolins but solidify as the creature ages, are made of keratin. Eight species of pangolin are thought to currently exist, but hunting and extreme loss of habitat have put the pangolin on the endangered list. Three species can be found in the primary African safari countries.

The ground pangolin (Smutsia temmincki) is the most prevalent of the three, although it is still rare to spot one on safari. They are listed as vulnerable on the IUCN conservation status.

The giant pangolin (Smutsia gigantea) is, surprise, the largest of the pangolins. The largest concentrations are found in Kenya, Tanzania and Uganda. It is listed as endangered.

The tree pangolin (Phataginus tricuspis) is also known as the white-bellied pangolin. It is native to equitorial Africa and can use its prehensile tail for balance when climbing. It is listed as endangered.

speciesLike a hedgehog, it can twist up into a ball when threatened, and like an anteater, it has a very long, sticky tongue which is ideal for eating ants and termites. Its tongue, which is attached to its last pair of ribs, is so long that when it is fully extended, it is longer than the length of its head and body. The pangolin does not have teeth, nor does it have scales on its underside, but it can run very quickly and is also adept in water and is a good climber. The pangolin is a nocturnal animal that mainly feeds on ants and termites, but will supplement its diet with other insects. The gestation period of the pangolin ranges betwen two to three months and a single young is the average number. 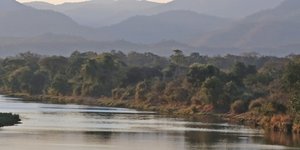 My safari guide from hell