Your African Safari uses cookies to improve functionality and performance of this site. More information can be found in our privacy policy.
By continuing to browse this site, you consent to the use of cookies.
OK
Actual screenshot of wildlife rangers taken by wpsWatch camera

Stopping poachers in their tracks

I do a variety of work in wildlife conservation, and it's been an exciting few weeks in South Africa for a wildlife NGO called Wildlife Protection Solutions (WPS). This non-profit uses technology to augment traditional wildlife protection methods that helps boots-on-the-ground rangers who are actively protecting endangered species.

WPS has created software that we call ‘wpsWatch,’ that allows multiple field feeds, such as camera traps, live unmanned aerial system video, etc., to be relayed live into a single-screen monitoring system. Threat assessment software filters through thousands of images to look for animal and human facial patterns--eliminating false positives (photos without anything in them).  When these patterns are detected, threat assessment software sends live alerts to the system, allowing real-time response to active threats. 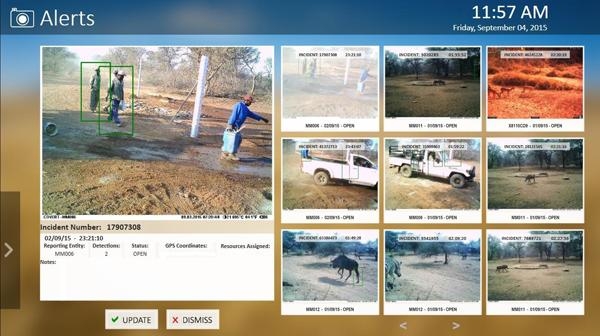 Just last week, our system captured suspicious human activity on a game reserve in South Africa. Upon reporting this activity and its location to the local ranger team, anti-poaching forces were deployed within three minutes to address the situation. They were able to locate and disarm the suspected poachers, though unfortunately the poachers were able to escape. We found out later that three rhinos were in the area, and the reserve manager had this to say about wpsWatch: “the information we received from the [system] during the past week was invaluable and certainly saved rhino lives. When I left this morning, there were three rhino in the plains [on the reserve].  They could have been dead if we weren’t able to act [expeditiously] the past few days.”

Highlights of the work WPS is doing:

To learn more about the work that WPS is doing, or to donate to the Equip-a-Ranger program, please contact Gretchen. To read a more detailed account of the anti-poaching incident, click here.

I fell in love with travel as a child - first on camping weekends and road trips - then eventually far away destinations by air. I didn't leave North America for the first time until I was 20, but since then have visited more than 35 countries, including 12 in Africa. I fell in love with the African continent the moment I set foot on the soil, and after three visits, I changed my life to allow my career to focus on Africa - writing, photography, travel consulting and conservation.