Your African Safari uses cookies to improve functionality and performance of this site. More information can be found in our privacy policy.
By continuing to browse this site, you consent to the use of cookies.
OK
Team at Cheetah Plains inspecting a solar panel

Electric vehicles and the safari experience

A game drive is the quintessential way to do an African safari. On a game drive you're able to cover great distances. Land Cruisers are big. Sitting nearly a meter off the ground, you've a lovely vantage point from which to take in the vistas and to scout for predators. Vehicles allow you the ability to approach dangerous wildlife without putting yourself, or them, in harms way. On safari, early morning and late afternoon game drives are the main activity.

In standard safari vehicles game drives consume decent amounts of fuel, with an average vehicle getting less than 18 miles to the gallon, or about 8 kilometers per liter. Fuel-based safari vehicles, particularly diesel, are noisy. You may be lucky enough to spot a lion cub from a moving safari vehicle but you won't hear its cries until the vehicle's engine is turned off. Skittish and/or shy animals often bolt when they hear a vehicle approaching. Hearing what your guide is saying can be tricky, especially if you're seated in one of the back rows.

Electric safari vehicles are expensive. As of now, September 2022, if you want solar powered vehicles on your safari, you'll be looking at a luxury or high-end safari. Clean energy vehicles are noticeably quieter than vehicles with combustion engines.

Your African Safari interviewed three pioneers of the solar safari vehicle movement to learn more about their e-vehicles, their off-the-grid ecoluxury lodges, and what initiatives lie ahead for their conservation goals. Each company is located in a different country and has been laser focused on harnessing clean energy via photovoltaic safari vehicles.

In alphabetical order, the companies interviewed are: Campi ya Kanzi in Kenya, Cheetah Plains in South Africa and Green Safaris in Zambia.

Campi ya Kanzi is located in the Chyulu Hills area and is nicely situated between Tsavo and Amboseli National Parks. It was founded by Luca Belpietro, who first visited the 283,000 acres Maasai reservation in 1975 when he was only 11 years old. 20 years later, Luca returned and partnered with local Maasai landlords to create the community owned, boutique ecolodge. 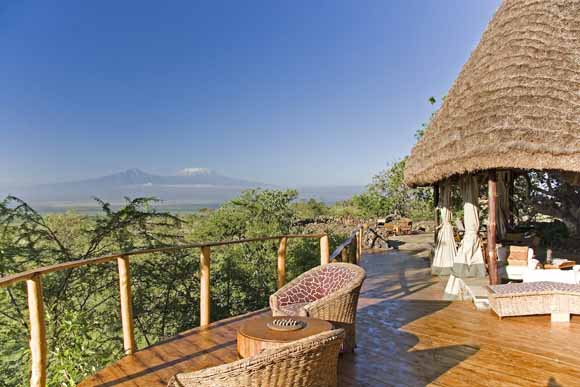 View of Kilimanjaro from Tembo House, Campi ya Kanzi

Campi ya Kanzi and environmental sustainability

Campi ya Kanzi officially opened in 1998 and was the first fully photovoltaic lodge in all of Africa. But they did not stop there. Campi ya Kanzi was also the first safari company to get an electric vehicle in Kenya, which they achieved by transforming a standard, fuel vehicle into electric. Your African Safari interviewed founder and visionary, Luca Belpietro, to find out more about their e-vehicles and what that means for their safari guests.

When did you transform your first vehicle and what was the impetus?

We started four years ago. The whole reason to have EVs is that we have been pioneer of sustainability since inception. It goes hand in hand with MWCT Chyulu REDD+ Project, which we initiated, funded and run. Buyers are Gucci, Tiffany, Netflix, Apple, to mention a few.

Sunreef came to our rescue, doing a phenomenal reconstruction of a Land Rover, transforming it into an amazing EV with solar panels on the roof. 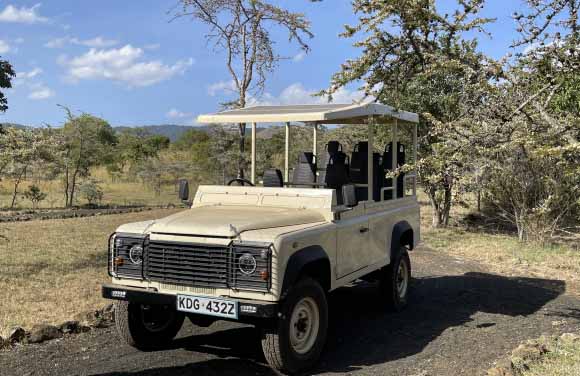 Nico Rosberg, former F1 world champion, was involved in the planning and testing. Former President Lech Walesa is the ambassador of this initiative.

How long did the process take?

It took almost two years to fine tune the vehicle. We were the guinea pig and were happy to be.

What is the range of the electric vehicles and how long do they take to fully charge?

We can charge up to 21 kW per hour per vehicle; that gets the EV Land Rovers charged in three hours. Vehicles are normally during lunch time, after morning game drive and before afternoon game drives. We currently have six electric vehicles with another six coming within the next six months. The new EV have a range of 500 km and will be charged fully in seven hours.

Is there anything else you’d like people to know about your conservation efforts?

We’ve partnered with Institut Le Rosey to create a new lodge: Chyulu Club. It was purpose built in 2020 to be completely free of fossil fuels. 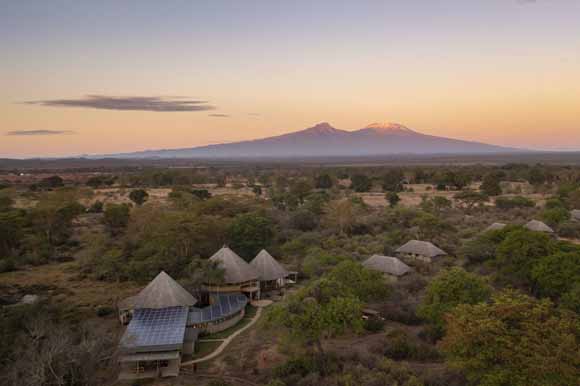 We’re pleased to be the first lodge in Africa to have zero carbon emissions and to be carbon negative. The electricity is 100% photovoltaic; all kitchens are induction. The camp has a 320 kW photovoltaic system which is able to charge eight vehicles at a time. Both Campi ya Kanzi and Chyulu Club are owned by Maasai Wilderness Conservation Trust, MWCT. The proceeds from tourism are all for the trust.

About Luca Belpietro of Campi ya Kanzi 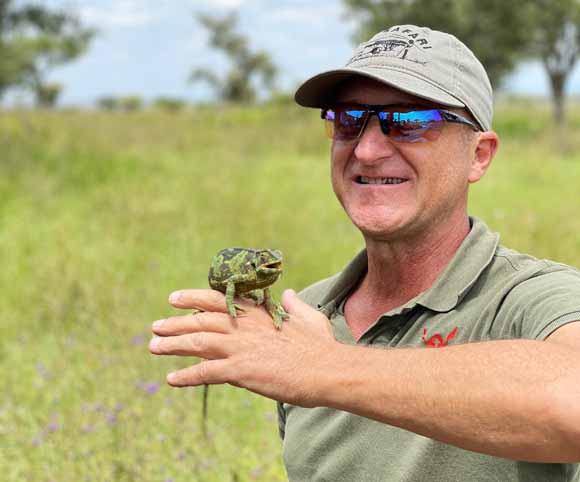 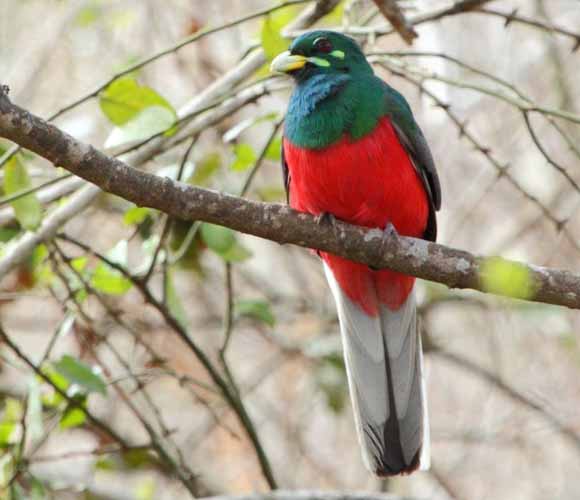 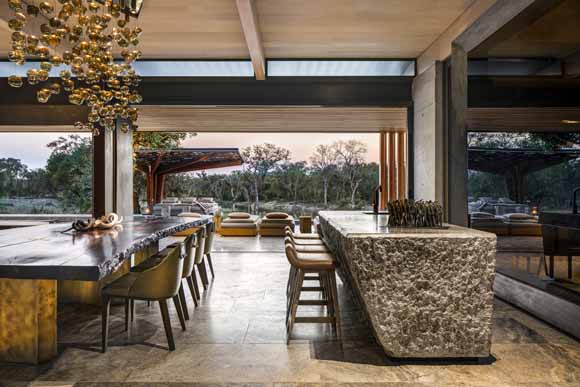 Cheetah Plains is focused on providing a carbon-neutral experience. All of their luxury guest accommodations are powered exclusively by solar electricity. In addition, they use Land Cruiser electric safari vehicles for their daily game drives. 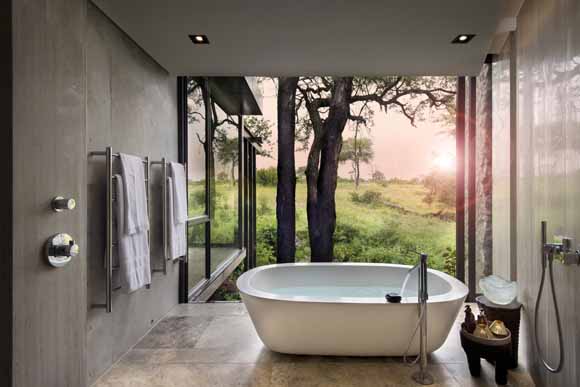 They are currently the only lodge in Sabi Sand to charge their electric vehicles via renewable sources and not via the main grid. Your African Safari interviewed Peter Dros, head of sales and marketing at Cheetah Plains, to find out more about their e-vehicles and what that means for their safari guests.

When did you start using electric vehicles for your safaris?

Cheetah Plains launched a rebuild and redesign in 2018. We began using the electric vehicles in December 2018.

How many vehicles does Cheetah Plains currently have?

How long does a fully charged battery last?

The charging of vehicles is based on distance travelled. 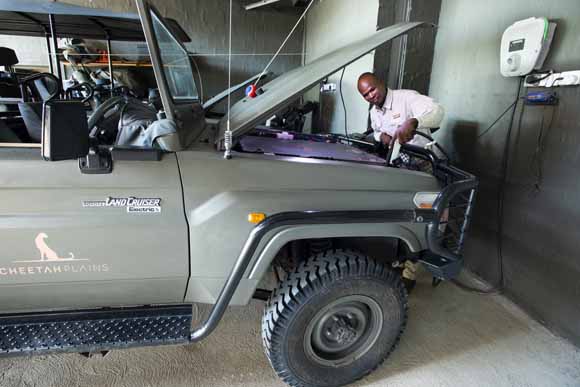 One fully-charged battery normally lasts about 70 – 90 kilometers. A game drive is normally around 25-30 kilometers.

How long does it take to charge an electric Land Cruiser?

If the battery is fully depleted the vehicle will take about three hours to recharge.

Is there anything else you’d like people to know about Cheetah Plains’ conservation goals/plans?

The total size of the Cheetah Plains solar plant is 330kWp made up of 1205 solar panels. Our solar plant project was completed in 2019 in the rebuild of the lodge. 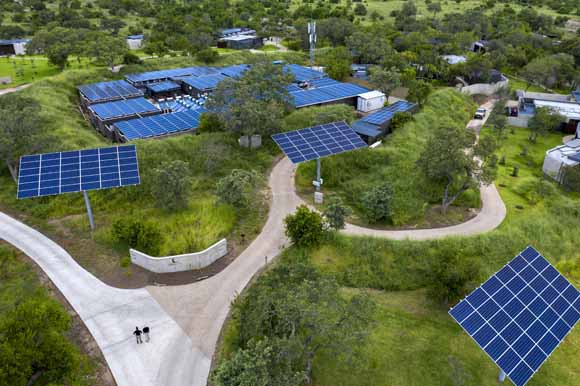 The total installation generates an average of 550MWh per annum which is an offset of 530 tonnes of CO2 emissions per annum. We are part of the bigger ecosystem of conservation efforts of the Sabi Sand Nature Reserve that focuses on rhino antipoaching, endangered species such as honey badger, African wild dog and African ground hornbill. 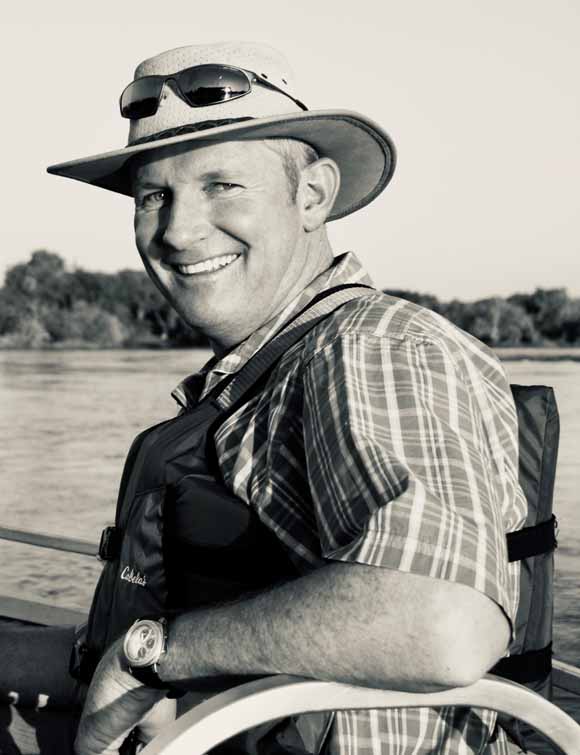 Green Safaris was born from the drive and desire to offer environmentally sustainable safaris while helping surrounding communities to see the value of wildlife tourism. The company was founded in 2009 by Dutchman Vincent Kouwenhouven and Brit Daniel Allcock. The low-key nature of Kafue, coupled by its large size and outstanding wildlife, attracted Vincent to Zambia. 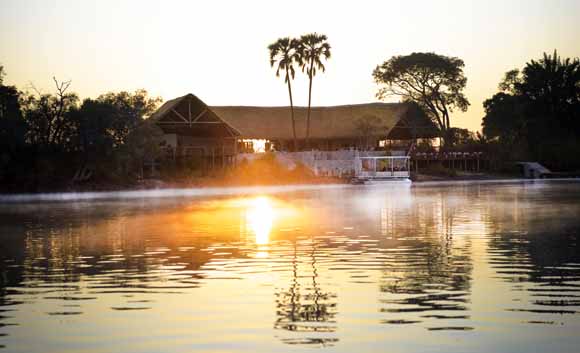 This luxury property was purpose built with the environment as the top priority. The lodge has an enormous solar bank to provide the bulk of their energy needs and allowing them to be completely off-grid. The lodge is located on the banks of the Kafue River, making it an excellent destination for game drives and boating safaris. 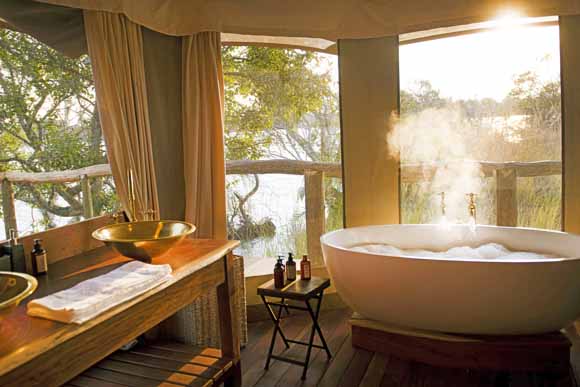 Your African Safari interviewed founder Vincent Kouwenhouven to learn more about their green initiative and what lies ahead for this innovative, environmentally-focused company.

On your website you state that you engineered the first electronic safari vehicle, which you call the eLandy. When was this?

We built the eLandy before the start of Green Safaris, in 2011

How long did it take for the first vehicle to be made?

With no technology off the shelf available, it took almost a year back then from start to finish. 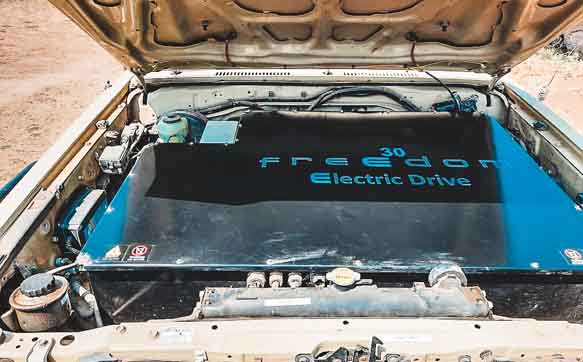 For example, we had to program our own BMS (battery management system), from scratch.

What was the process like? Did you go through many prototypes?

Testing, testing, testing! Once the vehicle arrived in Zambia, we obviously encountered some more challenges. For example, operating it on the black cotton soil meant we had to secure the wires connecting the batteries even more than we anticipated, since testing it back home in relatively smooth conditions. But we managed to overcome all issues and turn it into a very reliable machine.

Ila Safari lodge features a solar powered boat for guests to enjoy their boating safaris. When was it acquired? Are there plans to add more boats to this and/or other Green Safaris Lodges?

Ila had its first e-boat at the opening, so back in 2016. This month we expect to launch an electric dhow at Tongabezi, for quietly cruising the Zambezi River.

Is there anything else you’d like people to know about Green Safaris’ conservation goals/plans?

By now Green Safaris is about way more than introducing innovative technology to both enhance the customer experience and operate in a way more sustainable way. 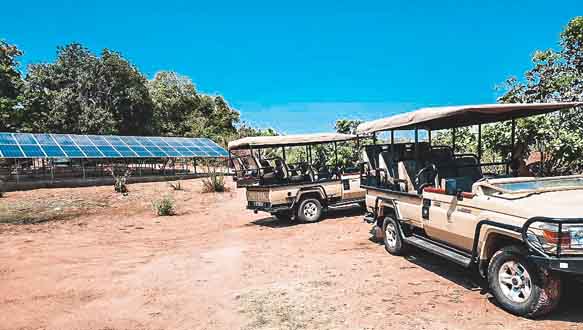 Harnessing the power of the sun. Green Safaris

During the pandemic we invested a lot in setting up organic farms in the vicinity of our lodges, at first to keep our staff busy, but more and more from a vision that we don’t run safaris in isolated game areas, but we form a part of way bigger ecosystems. By educating our communities on the importance of conservation, and creating jobs jobs jobs, we hope to be contributing to conservation even more. 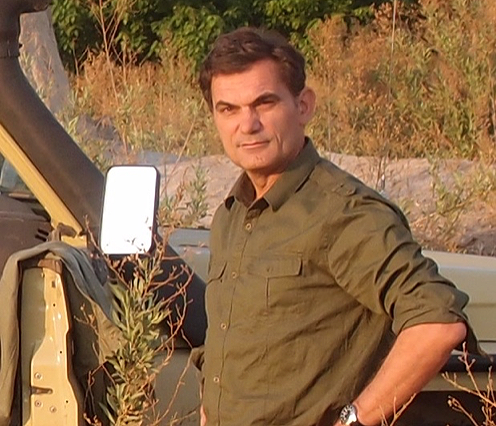 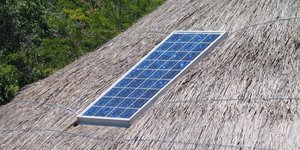 Published on May 28 2019
By: yourafricansafari.com

Giving the gift of light with Sababu Safaris

Published on June 26 2021
By: yourafricansafari.com